Alpha Delta Delta is a fraternity/sorority I created to help my son cope with having ADD. Getting my son the services he needed from the school system was hard enough, but when I caught him faking his medication, I knew I needed more help than I was getting. I read an article about how some of the more famous people in the world were thought to have had ADD and I got an idea. My older son made a joke about how ADD was Alpha Delta Delta in college frat parlance, and I quickly created a t-shirt with ADD in latin letters on the front 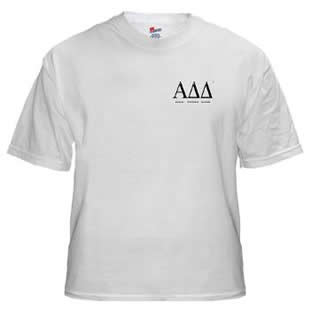 of the shirt and a list of famous “Alumni” on the back. When I gave it to him I explained that these people struggled with ADD too, but they went on to change the world. Without these people, the world as we know it would be quite different.

Not only did he start wearing the shirt to death, he took his meds and began to participate in coping strategies that were offered by his school and psychologist. Life got better. But that’s not quite the end of the story.

A few weeks later, his old habits of sneaking food and not wanting to do homework krept back into his routine. Many articles were written about how when one thing works with children with ADD, it usually was a short lived victory, so I came up with a saying, “My willpower is very week. What worked last week ain’t working this week.” I made the t-shirt for him and he got a kick out of it, but most importantly, whenever he wore it I remembered I had to do something different this week or I would not gain any ground with him. It as like he as wearing a post-it note for me to remember to change my methods in order to get him to participate in something.

Many more t-shirts, some for him, some for me, were created in the months and years to follow.

The t-shirts are very popular and are for sale still to this day.